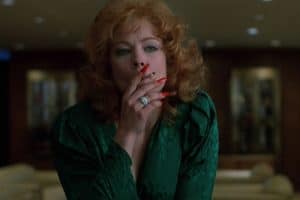 We have royalty on this week’s episode. We are graced by the presence of Kiwi Smith, writer of 10 Things I Hate About You, Legally Blonde, She’s the Man, The House Bunny, and so many more. She’s on the show to talk about a VERY different film from her own work – Bob Rafelson’s 1987 neo-noir, Black Widow. Kiwi gushes over the obsessive relationship between Debra Winger and Theresa Russell’s characters. She discusses having to change the ending of Legally Blonde several times. And she talks about how she physically mailed pages to her writing partner during the writing of 10 Things I Hate About You.

And if you haven’t seen Black Widow, you simply must!

With April Wolfe and Kiwi Smith.

Liked Episode 103: ‘Black Widow’ with ’10 Things I Hate About You’ & ‘Legally Blonde’ Screenwriter Kiwi Smith? Listen to these next...