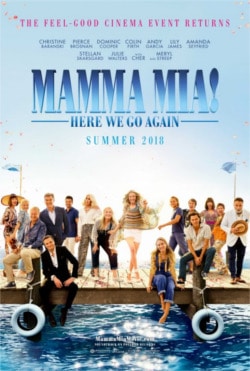 Mamma Mia! Here We Go Again
One of our most divisive episodes to date! The crew is joined by the wonderful Dave Holmes as they review Mamma Mia! Here We Go Again. The line is quickly drawn in the sand between those who love this movie and those who hate. You’ll have to listen to find out who is on which side! Plus, professor and critic Tavia Nyong’o calls in to discuss “whiteness” as it’s presented in cinema. He also elaborates on the recent screening series at the Brooklyn Academy of Music called “BAMcinématek and The Racial Imaginary Institute: On Whiteness.” Much to the joy of April, there is an in depth conversation on White Chicks. And as always, we have Staff Picks.

In news, James Gunn is fired, Marvel provided counseling centers for Infinity War, and the Cats movie announces its cast.