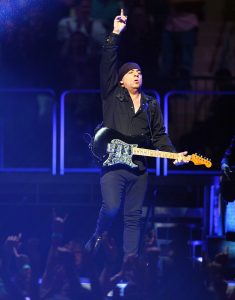 This weekend on the show: Steven Van Zandt! Of course, you might know him better as Little Steven, a guitarist for Bruce Springsteen’s E Street Band. A longtime friend of the Boss, he’s a veteran of the New Jersey music scene that launched Springsteen’s career, also playing with groups like Southside Johnny and the Asbury Jukes.

Or maybe you know him as an actor. He starred in the Netflix show Lilyhammer – the streaming giant’s first original production. He played Tony Soprano’s right-hand man Silvio Dante on the legendary drama The Sopranos, in a portrayal he based partly on his real-life friendship with Springsteen.

He can sing, he can act, he can play guitar. In other words: the guy has led an interesting life. He left the E Street Band in 1984 to pursue his own career, then rejoined in 1999, where he’s remained ever since.

He recounts all that in Unrequited Infatuations: A Memoir, and he tells us all about it. The months-long tours, recording sessions, international fame, the ups, the downs… the many, many head scarves.

Liked Steven Van Zandt? Listen to these next...