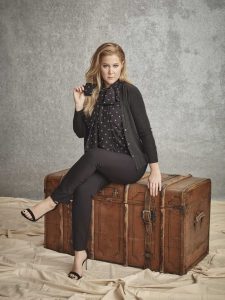 Amy Schumer is, of course, the creator and star of the hit sketch show Inside Amy Schumer. She also wrote and starred in the critically acclaimed romcom Trainwreck and has taped several comedy specials. She has been nominated for Emmys, Grammys, Golden Globes, a Tony, and even won a Peabody award for Inside Amy Schumer.

Amy’s newest project is a TV comedy called Life & Beth. She wrote, directed, created, and stars in the show. Life & Beth is intense, probing and a little unpredictable. Schumer plays the title character, Beth, which is also Amy’s middle name. When the show begins, Beth is living in Manhattan with a great job. She lives with her very handsome boyfriend who also has a great job. Then, when the first episode ends, an inciting event upends her life. It causes her to reexamine who she is, where she came from, and why she is the person she is today.

Amy Schumer talks with us about her new series Life & Beth and what inspired her to create it. She also shares why she said yes to maybe one of the most stressful jobs in showbiz, hosting the Oscars. Plus, she talks about her work in stand-up and how her comedy has evolved over the years.

A couple of things before you listen:

First: There is some references to sexual assault in this conversation. No graphic descriptions, just a few mentions of it.

Second: Amy Schumer just hosted the Academy Awards, but this episode was taped the Wednesday before. This means we did not talk about the on-stage incident between Will Smith and Chris Rock, or all of the other things that happened at the ceremony. We do talk a little about Chris Rock, but only in reference to his work as a past Oscars host.

And lastly: For the first 10 or so minutes of this interview, things get a little bumpy. It is not for the entirety of the conversation, but this first part of the interview gives some important context for everything else, so we left that part in, pretty much unedited.

Liked Amy Schumer? Listen to these next...