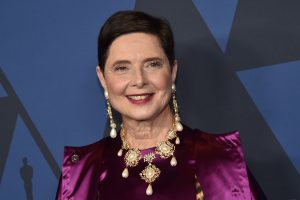 Isabella Rossellini on Marcel the Shell with Shoes On, working in experimental films and more

Isabella Rossellini is probably best known as an actor, having acclaimed parts in movies like Blue Velvet, Death Becomes Her and Big Night. She was born into European film royalty, being the daughter of director Roberto Rossellini and actor Ingrid Bergman.

Isabella is not just a terrific actor. She is also a model, a performance artist, an accomplished singer and even an academic. Just three years ago, she earned a Master’s Degree in Animal Behavior from Hunter College in New York City.

Most recently, Isabella has lended her talents to voice acting. She is starring alongside Jenny Slate in the movie Marcel the Shell with Shoes On. It is a comedy that mixes animation and live action that is based on Slate’s viral shorts from 2010.

Jenny Slate plays the film’s title character in the movie. He is a tiny, talking seashell with red shoes and a single googly eye, and the subject of a documentary. Isabella Rossellini plays Marcel’s nana, Connie. Connie lives in the backyard of the house Marcel lives in. She can be a little forgetful, and is not quite clear on the concept of what a documentary is.

Isabella Rossellini talks with guest host Louis Virtel about her role in Marcel the Shell with Shoes and what went into making the film come to life. Plus, she talks about some of her past roles and shares why she is attracted to working in experimental films.

Liked Isabella Rossellini? Listen to these next...