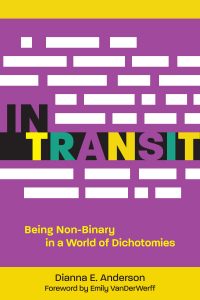 Dianna E. Anderson is a writer based in Minneapolis, Minnesota.

They are the author of books including Damaged Goods: New Perspectives on Christian Purity and Problematic: How Toxic Callout Culture is Destroying Feminism.

Dianna’s latest book called In Transit: Being Non-Binary in a World of Dichotomies.

As the title suggests, the book is an exploration of non-binary identity.

The book decodes the usually very academic theory on that subject. Breaks down how nonbinary people fit in with other queer and trans communities.

The book is also a bit of a memoir, covering how Dianna came out as non-binary.

Dianna came out as nonbinary later in life. As people around them explored identities other than man and woman, Dianna realized the non-binary label fit them better than either of those alternatives.

Dianna talks with Bullseye about their new book and their experiences as a non-binary person. Plus, we’ll discuss practical ways folks can be better allies to non-binary people.

Liked Dianna E. Anderson on ‘In Transit: Being Non-Binary in a World of Dichotomies’? Listen to these next...