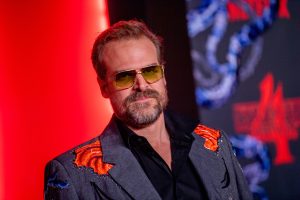 David Harbour is the quintessential working actor. He’s done theater, earning a Tony nomination for his run in Who’s Afraid of Virginia Woolf? He’s starred in big budget comic book movies like Hellboy and Suicide Squad. He had excellent turns in Black Mass, Brokeback Mountain, and many other movies. But odds are, you know David Harbour best from his role on Stranger Things – one of the biggest things on television right now.

Stranger Things is set in the 1980s, in the fictional town of Hawkins, Indiana. Harbour plays Jim Hopper, the town’s police chief. Not everything is as it seems in Hawkins. Hopper gets thrown into the thick of it when young Will Byers goes missing. Hopper offers to join the kid’s mom, Joyce (played by Winona Ryder), in the search. The search for Will takes some extraordinary twists and turns. There are monsters, secret government experiments, parallel universes and many other strange, scary things.

We caught up with David to ask about the craziest day of his entire career, and to our delight, he took us back to the first season of Stranger Things, and an intense, surreal experience on set.

Liked Stranger Things’ David Harbour on the Craziest Day of His Entire Career? Listen to these next...