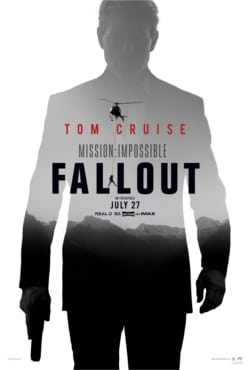 Your mission, should you choose to accept it, is to listen to the newest episode of ‘Who Shot Ya?’, drink some Café Bustelo, and leave a five star review on Apple Podcasts. This week Ricky Carmona, April Wolfe, and Alonso Duralde are talking about Mission: Impossible – Fallout. They are joined by the hilarious Brandon Johnson, who you may know from voicing Mr. Goldenfold on ‘Rick and Morty.’ The crew covers every aspect of the movie – the fights, the stunts, the way Angela Bassett say “plutonium.” Brandon does his best to hock his collection of bootleg DVDs. Alonso, again, makes the case for his potato salad. Ricky tears Alonso a new one for not inviting him to a Die Hard screening. And April tells us about getting drunk with her mother. Plus, the gang has an in depth discussion on the career of Tom Cruise. And as always, staff picks

In news, MoviePass is not doing so hot, Paul Schrader loves Taylor Swift, and two latino and hispanic watchdog groups call for a boycott of Paramount.

Next week we’re discussing The Spy Who Dumped Me