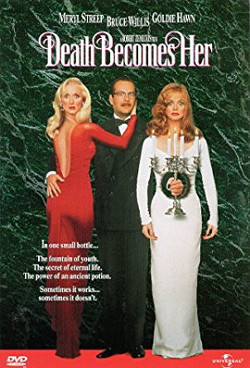 We’ve got a packed house today with Angela Trimbur, Lauren Parks, and Jenée LaMarque of the new film The Feels. The three women all act in the film with Jenée directing and co-writing with Lauren. They’re on the show to discuss Robert Zemeckis’ Death Becomes Her. Although not similar in tone or genre, April and the guests quickly find that both of these films are united in their commentary on women’s bodies. The Feels analyzes the shame felt by women unable to have an orgasm. While Death Becomes Her addresses the pressure women face to constantly look young – in, albeit, a very violent and supernatural way. Plus, they all discuss the special effects, the production design, and, of course, the delicious performance of Meryl Streep as the aging movie star, Madeline Ashton.

The Feels is available on Amazon.

If you haven’t seen it yet, go watch Death Becomes Her