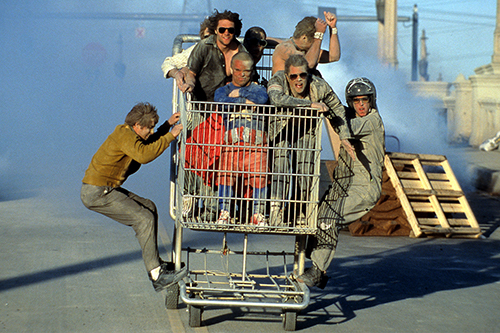 This week’s episode is truly one of our most powerful…and, of course, the film being discussed is Jackass: The Movie. April is joined by cinematographer and director Kirsten Johnson, recording from her closet in New York City. Kirsten has so many poignant and beautiful observations about pain, the body, life, and death. And she somehow connects it all back to Jackass and her latest film Dick Johnson Is Dead. In her latest film, Kirsten explores mortality and the impending death of her ailing father by staging him in a series of comical fake death scenes. Throughout the course of the episode, discussing this film allows April to open up about the recent passing of her own grandfather who raised her. This episode is funny, touching, heartening, life-affirming, and incredibly gripping. Share it with a loved one.

You can watch Dick Johnson Is Dead on Netflix now.

If you haven’t seen Jackass: The Movie – c’mon, you gotta.

With April Wolfe and Kirsten Johnson.

Please you promo code: Switchblade at kittypooclub.com for 20% off

Liked Episode 162: ‘Jackass: The Movie’ with ‘Dick Johnson Is Dead’ Director Kirsten Johnson? Listen to these next...