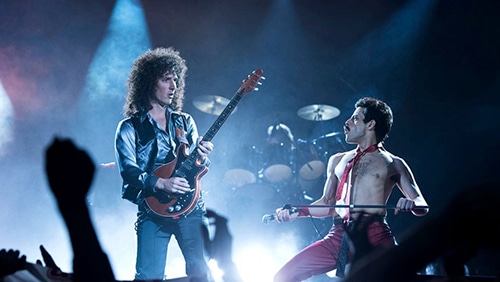 Bohemian Rhapsody
Don’t stop me now! We’re talking about the new Queen biopic Bohemian Rhapsody. We are so lucky this week to be joined by friend of the podcast, film critic Katie Walsh. This episode was recorded the night of the election, so you can certainly hear a level of optimistic anxiety in all the host’s voices. The crew dissects all the important parts of the new movie: Rami Malek’s fake teeth, the bad jokes, and how many times the band members say that they’re a family. Plus, we chat about the phenomenon of straight actors playing gay characters. AND, most importantly, Alonso kicks of the Holiday season with a new weekly segment called The El Mero Mero de Navidad Christmas Minute. Each week Alonso will recap all the Christmas movies he’s watched from the past week. The only caveat is that he must do it in under a minute. And as always, we have staff picks.

In news, the titles for the new Avatar sequels are in, the LA Film Festival is no more, and JJ Abrams seeks a “Megadeal.”