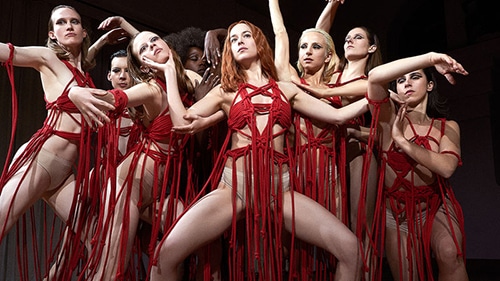 Suspiria
Even though Halloween is over, we’re still keeping it spooky. That’s right, we’re talking about our favorite “witch dance” movie of the year, Suspiria. This week we’re so lucky to have the hosts of ‘The Bechdel Cast’ podcast, Jamie Loftus and Caitlin Durante, on the program. The crew discusses their favorite aspects of the Halloween season. For Caitlin it’s the pumpkin shaped Reese’s peanut butter cups, for Alonso it’s the appearance of the sign banning silly string on Hollywood Boulevard, and for Jamie it’s the chance to buy a “Twerking Mummy” toy at CVS. Plus, the gang helps some previously failing movies pass The Bechdel Test. And as always, staff picks.

In news, the Wachowski’s are potentially retiring, FilmStruck closes down shop, and the MPAA turns 50.