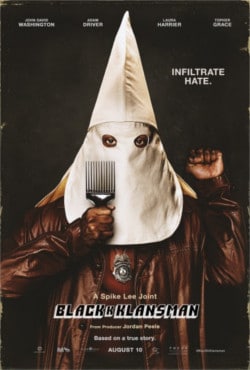 BlacKkKlansman
This is one of our wildest episodes to date. And for our 50th episode, no less! We’ve got first time guest, comedian Baron Vaughn (Grace and Frankie, Mystery Science Theater 3000) and returning guest Brandon Johnson (Rick and Morty, Animals). They’re on to discuss the brand new film, BlacKkKlansman. Brandon, once again, tries to hock bootleg merchandise. Baron earns his anointed title of “The Big Pun” by making puns with a machine gun pace. April holds it down by recommending some post WWII era German-Jewish poetry. And Ricky fixes his car stereo like the Fonz. Plus, the crew discusses the films, style, and career of BlacKkKlansman director Spike Lee. And as always, we have Staff Picks.

In news, the “Popular Movies Oscar” gets some support, Idris Elba tells everyone NOT to believe the James Bond hype, and screenwriter John August is compiling the list of popular films that can’t be found online.