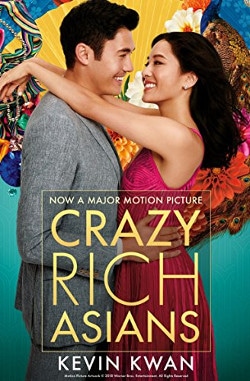 Crazy Rich Asians
This is a feel good episode, ya’ll! We’ve got comedian Jenny Yang on the program to talk about Crazy Rich Asians. She is uniquely qualified to discuss this film because she has seen it FIVE TIMES! This episode also signals the return of “The King of Christmas” – Alonso Duralde. He has traveled to the east coast and back to regale the crew of tales from his journey and his love for lobster. Ricky pours one out for the death of “Hiatus Ricky” as he goes back to work on Tosh.0. Plus, the gang goes over some of the most atrocious examples of whitewashing in movies – from Scarlett Johansson in Ghost in the Shell to Emma Stone in Aloha. And as always, we’ve got Staff Picks.

In news, Michael Caine reveals the ending to Inception, Kevin Spacey’s Billionaire Boys Club makes $618 in its opening weekend, Boots Riley has some thoughts on BlacKkKlansman, and Keanu Reeves and Winona Ryder may be married.

Ricky – 1). Crouching Tiger, Hidden Dragon 2). Cop Land
Alonso – In the Mood for Love
Jenny – To All the Boys I’ve Loved Before