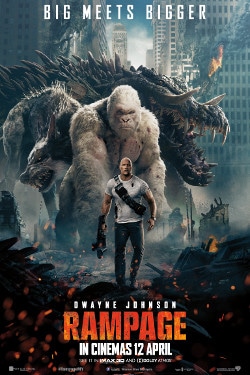 Rampage
A MONSTROUSLY huge episode this week. Artist, writer, and podcaster Johnnie Jungleguts joins the gang to talk all about the new joint by The Rock, Rampage. They discuss video game movies and how they are frequently terrible. April reveals her secret admiration for the Super Mario Brothers movie. And they ponder whether The Rock should learn to say no to some movie scripts. Plus, Brady Jandreau of the new film The Rider sits down with Drea Clark to discuss what it was like going from riding broncos to acting in front of the camera.

Next week we’re discussing I Feel Pretty with Drea Clark.