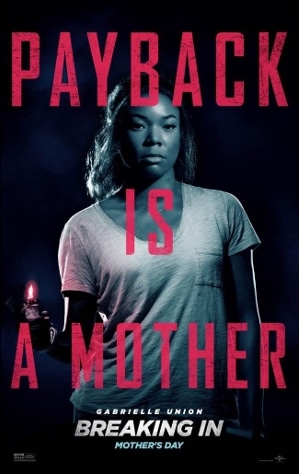 Breaking In
This week Ricky, April, and Alonso are joined by TV critic at The A.V. Club, Consequence of Sound, and IndieWire, LaToya Ferguson. They discuss the new Gabrielle Union joint Breaking In (And yes, Ricky does make a Breakin’ joke, don’t worry). LaToya is convinced that despite the tepid reaction, this is going to be the next Fast and the Furious franchise. The crew discusses their favorite home invasion thrillers, and what makes the genre thrive. Plus, since they have a TV expert on the show, they all discuss the TV shows that were made into movies – the good and the bad. You’ll be happy to know, Alonso does find an ally in his campaign for Josie and the Pussycats. And as always, we have our staff picks.

In news, someone live tweeted Greta Gerwig at the movie theater, 82 women rally at the Cannes film festival, Dave Matthews is a fan of Lady Bird, and Bryan Fuller is not happy about the Bohemian Rhapsody trailer.