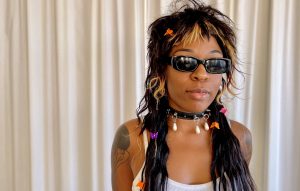 Sudan Archives has been making music for all her life. She grew up in Ohio, where she played violin in church and school bands. Her dad was a label guy, and he tried to make a pop duo out of Sudan and her twin sister, but it didn’t take. Sudan needed to do her own thing. To be an artist in her own right.

When she got her high school diploma, she headed out to Los Angeles. She then started hanging out at a club called Low End Theory, home to beatmakers Flying Lotus, Daedalus and Nosaj Thing. It was there she found her voice as an artist.

Sudan Archives is a violinist who breaks new ground with what the instrument can do in pop music. However, she’s not just a violinist. Playing the violin is only one color she paints with, one arrow in her quiver. When combined with her voice, her beatmaking and her songwriting, Sudan Archives’ music is mesmerizing.

She recently released a new album called Natural Brown Prom Queen, which has been met with rave reviews. The album just came out this Fall and Sudan recorded it at home, during the COVID-19 pandemic.

Sudan Archives joins Bullseye to talk about her music and new album Natural Brown Prom Queen. She also talks about her process for creating music and performing it live. Plus, Sudan dives into some of the violinists who inspire her.

Liked Violinist, singer and songwriter Sudan Archives? Listen to these next...