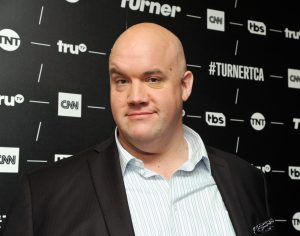 Occasionally, we like to ask some of our favorite creators about a work of art they wish they’d created. This time, our guest is Guy Branum. When we asked Guy about the thing he wishes he had made, he picked a movie: 2017’s Lady Bird, a classic coming-of-age story set in the early 2000s and directed by Greta Gerwig.

Guy is a comedian who’s appeared on Last Comic Standing, hosted the TV show Talk Show the Game Show, wrote and produced for The Mindy Project, and much more. He most recently appeared on the big screen in Bros.

For those unfamiliar, Bros is a romantic comedy written by Billy Eichner and Nicholas Stoller about a same sex relationship. It’s one of the first such films to come out of a major studio, and the first major studio pictures of any kind to feature an all LGBTQ principal cast.

The plot centers around Bobby, a bookish museum curator played by Eichner, and his relationship with Aaron – a… well, a bro. He plays pickup games in the park, has a rockin’ bod, the whole 9 yards. Guy plays Henry, Bobby’s best friend.

The movie is a lot of fun and a great watch for romantic comedy fans this holiday season.

Liked I Wish I Made That: Guy Branum? Listen to these next...