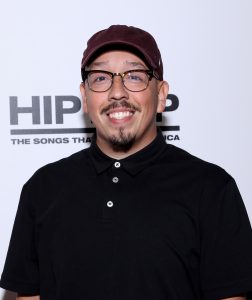 Journalist and author Shea Serrano has covered basketball and pop culture for ESPN, XXL, Grantland, the Ringer and more. His path to a career as a writer was kind of unusual, however. Born and raised in Texas, Serrano originally worked as a teacher who’d find little moments to write in his spare time. It wasn’t until his 30s that he went into writing full-time. He wrote his first book around this time, too: The Rap Yearbook is a New York Times bestseller and a critical favorite. When we first talked with Serrano in 2017, he’d just followed it up with Basketball and Other Things.

Basketball and Other Things is kind of like a written version of a late night party discussion with friends – with cool illustrations. Serrano covers topics like “great basketball villains” and “which NBA players get remembered for the wrong reasons?” He also asks questions important to any basketball fan, like “Who’s in The Disrespectful Dunk Hall of Fame?”

He’s since followed up with Movies and Other Things – a similar book with movie rankings, hot takes and more ice breakers. This past month he expanded the illustrated series with another entry: Hip-Hop and Other Things. Like its predecessors, it’s an illustrated collection of questions, rankings and thoughts designed to provoke deep discussion and maybe a few silly arguments.

A version of this interview originally aired in October of 2017.

Liked Shea Serrano? Listen to these next...