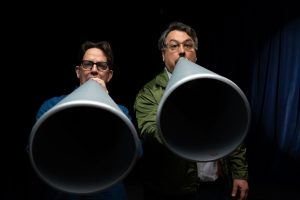 John Linnell (left) and John Flansburgh (right) of They Might Be Giants. (Photo by Sam Graff)

At the heart of They Might Be Giants, there are two Johns: John Flansburgh and John Linnell. The two singer/songwriters have been writing and recording together since 1982 — nearly 40 years.

In that time, the band’s released 22 albums, won two Grammys, and have cultivated a fanbase that is passionate, fun-loving… maybe a little nerdy. They became the first major artists to release an album exclusively for online download sales with 1999’s Long Tall Weekend. They ran a hotline called “Dial-a-Song” where fans could call an answering machine to hear demos of songs they were working on. The hotline still works, by the way — if you call 844-387-6962, your phone will play back a They Might Be Giants track.

They Might Be Giants’ sound can be a little hard to pin down: On some records it’s abstract and goofy, sometimes it’s broody power pop, sometimes it’s… something else entirely. They’ve also earned Grammy nominations making children’s music, with songs like an uptempo cover of the 1959 song Why Does the Sun Shine? and the more scientifically accurate Why Does the Sun Really Shine? (The Sun is a Miasma of Incandescent Plasma).

Their newest project, BOOK, is a record, but it’s also… a book. It’s a hardcover collection of photos of the band’s longtime home of New York City, by street photographer Brian Karlsson. The photos are set alongside lyrics from the band, which were hand-typed on a 1970s IBM Selectric typewriter by designer Paul Sahre. It’s a remarkable work.

The Johns sat down with our correspondent (and longtime TMBG fan) Jordan Morris. They talk about their early years, their songwriting process, and their “lost album” — plus, have they heard the crust punk version of Ana Ng? We’ll play it for them!

Liked They Might Be Giants? Listen to these next...