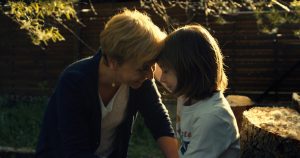 The documentary Little Girl is set in a small suburban town in France. The film centers around Sasha, who’s 8. When the movie opens, you see Sasha get ready for her day. She’s just put on a sequin dress, fusses with a hair band, tries on a silly hat, takes off the silly hat, then she goes out to play in the snow.

In the next scene, it’s Sasha’s mother. She’s talking with a doctor. She tells him, in French, that Sasha is a little girl. The doctor starts asking pointed questions like “how do you know?” and he uses male pronouns. Sasha’s mom walks him through all of it. She’s polite, of course, but you can tell how exhausting it all is for her.

In Little Girl, directed by Sébastien Lifshitz, that’s more or less the film’s only conflict. It dominates the life of Sasha and her family. Everywhere Sasha goes, she must explain who she is, answer questions, and fight to clarify something so simple and concise.

The documentary shows in very real and plain terms what it’s like to be a trans child, to be a part of that child’s family, and to raise and love that child.

We talk with director Sébastien Lifshitz about the film and what it was like documenting Sasha’s everyday life and the unique challenges she’s faced with. He tells us what inspired him to make the film and how he got connected with Sasha and her family. He also shares how Little Girl has impacted the people who see it, and what they tell him.

Liked Sébastien Lifshitz, director of ‘Little Girl’? Listen to these next...