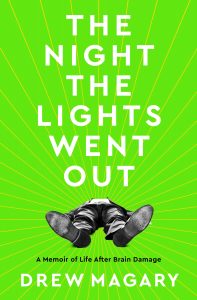 Drew Magary on The Night The Lights Went Out

Drew Magary is a writer and novelist. He was a longtime columnist at Deadspin. He’s written features for GQ, The Atlantic and more.

His latest work is a memoir. In December of 2018, Drew collapsed after an award show in New York. His friends found him, called 911, and paramedics rushed him to a hospital. In the days and weeks that followed, his life changed profoundly.

In The Night The Lights Went Out, Drew recounts his accident and his road to recovery. He chronicles his experience with brain damage and hearing loss, interviews the people who cared for him while he recuperated. He also talks frankly about how he and his family have dealt with the aftermath.

The book is harrowing, like you’d expect in a book about traumatic brain injury. Drew talks about his renewed appreciation for life. The Night The Lights Went Out is unexpectedly grounded and funny, too.

Jesse Thorn talks with Drew about why after recovering from a catastrophic brain injury, he decided to quit his stable writing job. Plus, what it was like to relearn things he used to do on a regular basis. They get more into the particulars in the interview – as a heads up, things get a little graphic.

Liked Drew Magary, author of ‘The Night The Lights Went Out’? Listen to these next...