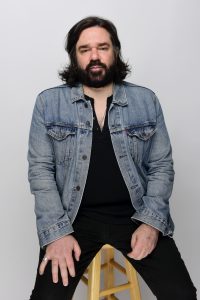 Matt Berry on “What We Do in the Shadows,” “Toast of London” and more

Matt Berry asks himself a very simple question before choosing which projects he wants to do. Is it funny? That’s it. It’s probably the reason why the British actor-comedian is rarely seen in any role that isn’t hilarious, or at least mostly funny and kind of odd. That’s Matt’s signature.

Matt has starred in a bunch of comedy shows including The IT Crowd, The Mighty Boosh, Garth Marenghi’s Darkplace, and these days he’s in the hit series What We Do In The Shadows.

There are four vampires in What We Do in the Shadows. They all share a big house on Staten Island in New York. They suck blood from victims and mostly wear cool, spooky, fancy clothes. But they are not cool vampires. They are vain, dumb, self sabotaging goofs.And maybe the goofiest vampire of them all is Laszlo Cravensworth, played by our guest Matt Berry.

When we last had Matt on Bullseye, he talked with us about the best part of playing a vampire, where he got the inspiration for his Toast of London character, how writing songs from the perspective of a serial killer really boosted his career and more.

All four seasons of What We Do in the Shadows are currently streaming now on Hulu.

This episode originally aired in 2020.

Liked Matt Berry? Listen to these next...