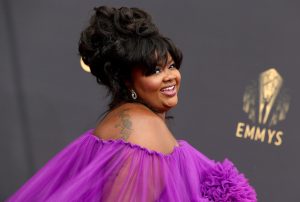 Comedian Nicole Byer is busy, in every sense of the word. She plays the role of headstrong Nicky on NBC’s Grand Crew, a show about a group of wine-loving friends in Los Angeles who are doing their best to climb the career ladder, maintain relationships, and love each other. She’s doing standup. She’s co-hosting the show Wipeout with John Cena. She has four podcasts – Why Won’t You Date Me, Newcomers, 90 Day Bae, and Best Friends! With Sasheer Zamata. In 2020, she published her first book “#VERYFAT#VERYBRAVE.” She even plays Susie’s mom in the upcoming Rugrats reboot!

Nicole is no stranger to a packed schedule, however. In the mid 2000s, she moved to New York to study improv. She waited tables by day and took classes at Upright Citizens Brigade at night. She did improv and sketch for years, before deciding to try standup comedy in 2013. That same year, she began appearing on MTV’s Girl Code and her television career took off after that. She guest starred on hits like BoJack Horseman and Bob’s Burgers. In 2016, she starred in an autobiographical comedy on MTV, Loosely Exactly Nicole. It was directly after this that Nicole was offered a hosting gig alongside chocolatier Jacques Torres on Netflix’s Nailed It.

Nailed It has a simple premise: bring people together in a big kitchen and have them make a massive, pretty cake. Only, none of the people know anything about baking. Or cooking in general. And instead of 4 hours, they’re given 90 minutes. What could possibly go wrong? Well, everything. But Nicole is a delight on this feel-good baking disaster show. And the icing on the cake? She’s currently nominated for her third Emmy, for hosting Nailed It.

The conversation, from last year, was conducted by the one and only Tre’vell Anderson. They’re a veteran entertainment writer and co-host of the Maximum Fun Podcast FANTI.

Liked Nicole Byer? Listen to these next...