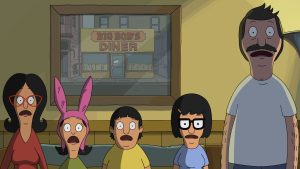 Loren Bouchard on Bob’s Burgers, the new movie and more

When it comes to Bob’s Burgers, the hit, long running animated TV sitcom created by Loren Bouchard, it’s kind of hard to articulate why the series is animated. For one, it’s a very grounded show. It’s about a family that owns a burger shop near a dilapidated theme park. There are not any talking dogs or trippy sequences where everyone turns into something random like butterflies or popcorn or say spoons. All of the characters are humans, and they do not look especially stylized like, say, The Simpsons.
Bob’s Burgers could be a live action show and more than likely not much would change. The writing would still be great. The plot would pretty much be the same too. The characters of the show including Bob Belcher, his wife Linda, their kids Tina, Gene, and Louise would still all be funny, weird and a little unhinged.
However, there’s something about the animation that makes the show pretty magical. Maybe ti’s the pacing of the dialogue, the musical sequences or maybe it’s just that deranged, almost feral look Tina gets when she is really on one. It’s what has made Bob’s Burgers so beloved by its fans, adored by critics and the recipient of eleven Emmy nominations, and now… a movie.
The Bob’s Burgers Movie hit theaters this past May, and it’s streaming now on Hulu and HBO Max. It’s a great movie for kids, adults, longtime fans of the show and people who haven’t heard of it.

Loren Bouchard joins Bullseye to talk about Bob’s Burgers, The Bob’s Burgers Movie and how the series came to be. He also shares what makes the animated series different from others. Plus, he’ll talk about one of the first shows he worked on: Dr. Katz, Professional Therapist.

Liked ‘Bob’s Burgers’ creator Loren Bouchard? Listen to these next...

Dianna E. Anderson on ‘In Transit: Being Non-Binary in a World of Dichotomies’