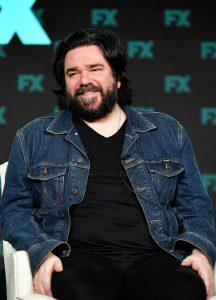 Actor-comedian Matt Berry has a very simple formula for choosing which projects he wants to do. Is it funny? That’s it. Which is probably why you’ve never seen the British actor-comedian in any role that wasn’t hilarious. Or at least mostly funny and kind of odd. That’s Matt’s signature. There are comic actors who are kind of chameleons and have crazy range, play a million different characters and do amazing jobs at it. Matt Berry is not one of those comic actors. He does one thing, pretty much, but he is the best person in the world at it.

What does he do? I guess you can call it “haughty, elegant buffoon.” Think if Sir Ian McKellen were kind of a clueless jerk.

Matt plays these roles so well that it’s hard to imagine that he never really planned to be an actor or comedian. He started out with hopes of being a visual artist and musician and fell into an acting gig after a serendipitous music performance with The Mighty Boosh. From there he went on to a small role on The Mighty Boosh‘s television series, then Garth Marenghi’s Dark Place and eventually won his star-turning role on the British TV series The IT Crowd.

After his success on The IT Crowd, Matt went on to create his own show Toast of London. In it he plays middle-aged actor, Steven Toast. Toast is of the sort a downmarket version of Derek Jacobi. Successful, but just barely. Desperate for the respect and acclaim he feels entitled to, he usually finds himself in embarrassing situations and scandals that are the result of overblown ego. The show is strange and very funny.

Matt currently stars on the FX series, What We Do in the Shadows, a show about a group of vampires living in current-day Staten Island living their lives while trying to…well, not be outed as a group of centuries old undead creatures in the modern world. The show is based on the 2014 Taika Waititi and Jemaine Clement movie of the same name and just finished its second season.

We talk with Matt about playing a vampire on TV, where he got the inspiration for his Toast of London character, and how writing songs from the perspective of a serial killer really boosted his career. All that and more on the next Bullseye!

What We Do In the Shadows is currently streaming on Hulu.

Matt’s new album, Phantom Birds, will be released on September 18th and is available for pre-sale now.

Liked Matt Berry on “What We Do in the Shadows,” “Toast of London” and more? Listen to these next...