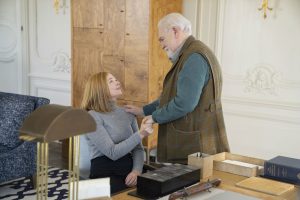 She plays Siobhan Roy, but to her friends and family, it’s just “Shiv.” She’s the youngest child and the only daughter in an ultra-wealthy family. The patriarch, Logan Roy, is the head of a large media conglomerate, Waystar Royco.

Logan Roy is aging and can’t run the company forever. Who will take over? And what are they willing to do for it?

In the first season, other members of the family fight among themselves, hoping to be the next to lead the family empire. At first, she’s happy to stay above the fray, working in politics. But that’s only at first.

Like pretty much every character on Succession, it doesn’t take long for the cracks to show: she worries that her influence in her family is the only thing that matters to her career. Her marriage is falling apart.

Linda Holmes, the host of NPR’s Pop Culture Happy Hour, talked with Sarah about what it’s like to play one of the most fascinating, complex and confounding characters on television today. Plus, what Sarah hopes Shiv will get to do in Succession‘s third season.

Liked Sarah Snook, from HBO’s “Succession”? Listen to these next...