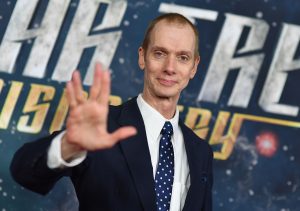 Doug Jones: The Craziest Day of My Career
The Craziest F**king Day of my Entire Career is a segment that gives us the chance to talk with some of our favorite people about some truly unbelievable stories. This time around, we’re joined by actor Doug Jones.

He is best known for his collaborations with filmmaker Guillermo del Toro. Jones often portrays non-human creatures with the help of visual effects, prosthetics and heavy make-up. You’ve seen him in The Shape of Water as the amphibian man – and as the terrifying faun with eyes in his palms in Pan’s Labyrinth.

These days you can see his work on FX’s What We Do In The Shadows. Jones portrays The Baron, a grotesque, centuries old sort of super vampire. He also plays Commander Saru on Star Trek: Discovery.

When we asked him about the craziest day of his entire career, he took us back to 1998 to the set of the film Bug Buster. During filming, he had an unforgettable run in with Randy Quaid.

You can watch Jones in the first two seasons of Star Trek: Discovery on CBS: All Access. The show’s third season is set to come out later this year. The latest season of What We Do In The Shadows is available to stream on FX Now.

Liked Doug Jones: The Craziest Day of My Career? Listen to these next...

Mary Randolph Carter on “The Joy of Junk”