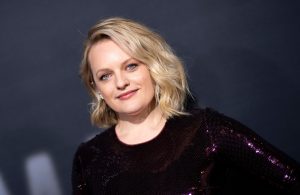 Elisabeth Moss grew up in LA, just a stone’s throw from the studios and back lots. So maybe it’s not a surprise that she’s been acting since she was a young girl. She’s accumulated almost ninety film and television credits since the early 90s. She’s been in some of your favorite movies and TV shows from Batman: The Animated Series, to Oscar winning film Girl, Interrupted to The West Wing.

But what her catapulted her to fame was her breakout role as Peggy Olson on the hit television series Mad Men. Peggy was the naive but ambitious secretary turned advertising wunderkind that served both as foil to Mad Men‘s Don Draper and the embodiment of the evolution of modern women in the workplace.

Elisabeth followed her success on Mad Men with a starring turn as June in the television series, The Handmaid’s Tale. Based on Margaret Atwood’s 1985 dystopian novel about women forced into childbearing slavery, June, or as she is known in the totalitarian society in whis the show is set, Offred is a Handmaid — women of childbearing age who unwillingly serve as surrogate mothers. Throughout the series June is resilient in the face of her harsh new world. And she attempts to escape her new reality several times.

Her newest role is playing the legendary 20th century horror writer, Shirley Jackson in the film, Shirley–  based on the novel by Susan Merrell. In the film, Shirley and her college professor husband Stanley, played by Michael Stuhlbarg, have welcomed another young couple into their home to stay with them. They already have a tempestuous marriage. Shirley struggles with depression and anxiety. Stanley is a serial womanizer. The strain of living with the new young couple takes its toll on their marriage, and Shirley’s mental health, but also offers her inspiration for a new novel she hopes will be her masterpiece. The film’s ethereal, subtly menacing feel does a remarkable job mirroring Jackson’s own work as well as immersing the audience into the fictional Shirley’s world.

Elisabeth joins us this week to talk about adding Producer to her resume, her fascination with playing women accused of losing their minds, and of course her iconic role in the 1991 Hulk Hogan comedy, Suburban Commando. All that and more on the next Bullseye!

Shirley is available to stream starting June 5th on Hulu and is also playing in select Drive-Ins.

Liked Elisabeth Moss? Listen to these next...