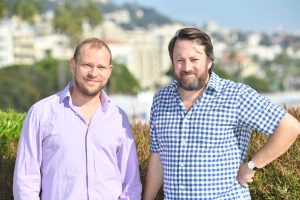 David Mitchell and Robert Webb met in 1993. They were college students at the University of Cambridge in the UK and were both performing in various theater productions where they became fast friends. They eventually took to the stage as a double act: Mitchell and Webb. Soon, stage shows turned into TV writing gigs which then eventually led to their own sketch TV shows: The Mitchell and Webb Situation and That Mitchell and Webb Look.

In 2003, they starred on the British sitcom called Peep Show, which helped make them international names. Peep Show follows the lives of two dysfunctional roommates, but with a unique twist: instead of the show being set in front of a live audience, the camera is mounted on each character’s head providing a point-of-view experience for the viewer.

The series ran for an incredible nine seasons. It helped launch the careers of Academy Award-winning actress Olivia Colman and Emmy Award-winning writer Jesse Armstrong, who went on to create the HBO show Succession.

The duo reunited for the sitcom Back, which premiered in 2017. The series follows estranged foster-brothers, Stephen and Andrew, and their long struggle for control over the family pub. Back just returned for a second season on IFC.

Content warning: While most of this conversation with Mitchell & Webb is fun and lighthearted, it concludes on a serious note. During the interview, Jesse asks Robert Webb about some past statements he made that were critical of the British charity Mermaids, which provides care and support for transgender and gender nonconforming children.

If there is a gender nonconforming child in your life and you’re looking for help, Gender Spectrum provides resources and training around gender for families, teachers, doctors, mental health workers, and other professionals. They’re online at genderspectrum.org.

Our company, Maximum Fun, has also been proud to support the work of Trans Lifeline. If you are transgender or gender nonconforming and you need emotional support or are facing a crisis, you can find them online at translifeline.org, or call 877-565-8860.

Liked David Mitchell and Robert Webb? Listen to these next...