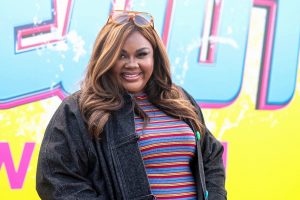 Nicole Byer on hosting game shows, staying busy and how the pandemic has changed how she works

Nicole Byer is a force of nature. She hosts the game shows Nailed It on Netflix and Wipeout on TBS. She hosts four podcasts. She hosts four — FOUR! — podcasts: Why Won’t You Date Me, Newcomers, 90 Day Bae and Best Friends. She’s in the upcoming Rugrats reboot. And she’s delightful in all of them!

Nailed It is a baking game show that puts a twist on your typical cooking competition. It has all the features of your typical cooking competition: the big kitchen, the complex recipes, the prize money, the top-notch chef on the judges’ panel. It challenges the contestants to make ornate, intricate creations But what makes the show unique is what it doesn’t have: Detailed instructions. Enough time to work with. Contestants who are really good at the thing they’re doing.

It sets the bar impossibly high, but on Nailed It, perfection is never the goal. Instead, it celebrates failure. It’s an ode to “Well… at least you tried your best, and that’s good enough.” It’s never mean and everyone is in on the joke. And it is very, very funny. The show’s fifth season, pairing contestants up into teams of two, premiered on Netflix at the end of March.

Beyond that, Byer is an accomplished actor, having played a fictionalized version of herself on the MTV/Facebook Watch comedy Loosely Exactly Nicole. She’s done hidden-camera prank shows, sketch comedy, improv and stand-up. She’s got an Emmy nomination. Really, she’s about as funny as it gets.

Byer sat down with guest host Tre’vell Anderson for a wide-ranging interview about hosting game shows, staying busy and doing comedy despite the pandemic. Plus, she shares some stories from behind the scenes on her TV shows, including her ideas for keeping Nailed It fun despite producing the show with everyone socially distanced.

Liked Nicole Byer? Listen to these next...