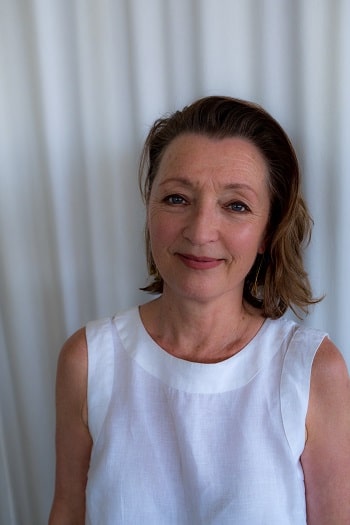 Photo: Jesse Thorn
Lesley Manville on working with Mike Leigh, the latest season of Mum and more
British actor Lesley Manville is truly a master of her craft. You might know her work with the brilliant director Mike Leigh. She starred in some of his best movies like Secrets & Lies, All or Nothing and Another Year.

She got her start acting on TV back in the ’70s. Back then she was a teenager living in England. Then came her career in theater. She’s been in plenty of plays with the prestigious Royal Shakespeare Company.

She’s had a long and successful career overseas – and she’s finally breaking through in the states. Later this year, she’ll be in the follow up to Disney’s Maleficent.

In 2017, she portrayed Cyril in Phantom Thread. The film is set in the ’50s post-war London where Cyril and her brother Reynolds Woodcock (Daniel Day-Lewis) are renowned dressmakers. The Woodcocks are at the center of British fashion. They dress movie stars, socialites and royalty with a distinct style. The stunning performance earned her an Oscar nomination.

Her latest starring role is on the BBC show Mum. In it, she plays Cathy, a widow in her 50’s living out in the suburbs with her adult son Jason. We see her grow and learn a lot about herself over the course of the series. The show circles around a budding relationship with her long-time best friend Michael. Mum is very grounded, a bit serious – but also really funny.

Lesley joins us to talk about starring in the BBC sitcom Mum, and how she almost had a career as an opera singer. Plus, what it’s like working with director Mike Leigh, and how she gets in character employing his unique improvisational style.

It’s an incredible challenge to deliver an emotionally honest portraits of ordinary people, but she nails it every time.

The third and final series of episodes of Mum are out now on the BBC streaming service BritBox.