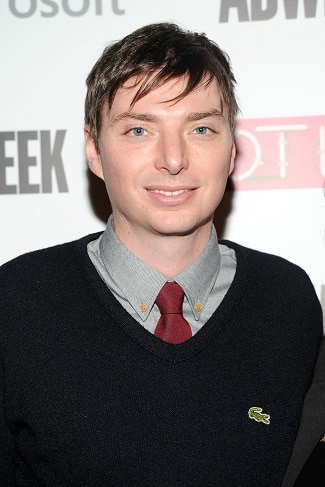 His latest work can be seen on NBC’s A.P. Bio. Mike is creator, writer and showrunner of the series. The show stars Glenn Howerton, Patton Oswalt and legendary SNL writer Paula Pell.

If you haven’t seen the show, here’s the premise: Jack portrayed by Glenn Howerton used to teach philosophy at Harvard. Now he doesn’t. To make ends meet he gets a job teaching A.P. Biology at a high school in his hometown of Toledo, Ohio. He’s a grumpy guy who thinks if the world were a fair place, he’d be getting a MacArthur Genius Grant or whatever. He’s a jerk. He knows it. He doesn’t care.

Maybe you’re thinking you’ve seen this kind of show before. The teacher returns home. Then he grows as a person, becomes lovable and relatable. But A.P. Bio isn’t that show. If our scrooge protagonist learns and grows, well, there isn’t a show. And that’s what makes it so funny – it takes a sitcom trope you’re familiar with, but refuses to play by the rules.

Mike joins us to talk about the latest season of A.P. Bio. He grew up in Toledo, and explains some of the baffling questions the writers room had about his hometown. Plus, working with Paula Pell – and why sometimes it’s better to leave the camera rolling on her improvising than spending hours perfecting jokes in the writers room.