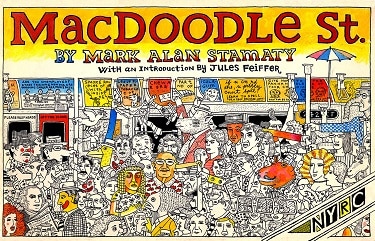 Photo: New York Review Comics
Cartoonist Mark Alan Stamaty on ‘MacDoodle Street,’ ‘Who Needs Donuts?,’ and more
We’re thrilled to share our conversation with cartoonist Mark Alan Stamaty. We’re huge fans of his children’s book – “Who Needs Donuts?” Mark’s wonderfully illustrated book tells the story of a kid in a cowboy suit who’s bored with his family. He hitches up his wagon and heads out for the big city in search of donuts. After a wild adventure he realizes there are things far greater than donuts. It’s a charming and hilarious book for kids. And, trust us, adults will love it, too!

Mark Alan Stamaty got his start working at a handful of New York papers, with a few regular comic strips. There’s Washingtoon, a political strip. A few regular comics in the New York Review of Books. And MacDoodle Street, which he published for the Village Voice in the late ’70s.

MacDoodle Street was just released as an anthology collection. In MacDoodle Street, you see New York kind of the way a kid from outside the city might: a wild, bizarre and kind of fantastic place. Overwhelming, but endlessly interesting and stimulating. This new edition features a brand-new, twenty-page autobiographical comic by Stamaty on why the short-lived but treasured MacDoodle Street never returned to the Village Voice. It’s a unique, funny, and poignant look at the struggles and joys of being an artist.

We’re thrilled to share this conversation with Mark Alan Stamaty. He’ll give us the scoop on his new anthology collection, and how his childhood influenced his work. Both of his parents had the same profession as him. Plus, where he gets the silly ideas for his stories and illustrations. Rhinos on the subway wearing fancy hats! Shark-shaped cars!