Erik Adams and Claire Zulkey of The AV Club recommend some of their favorite television – the new drama about a blurred line between life and dream life called Awake and the gleefully self-promotional reality show RuPaul’s Drag Race.
(Embed or share this segment) 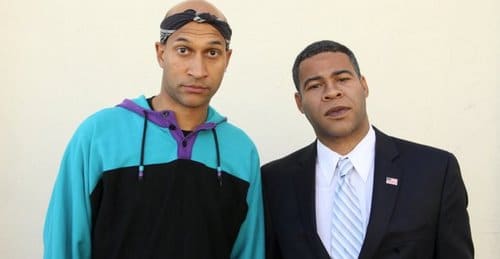 Keegan-Michael Key and Jordan Peele are actors, comedians, and the creators and co-stars of the new Comedy Central sketch show Key & Peele. They met during their years as cast members on MADtv; you might also recognize Jordan from adult swim’s Childrens Hospital or perhaps you caught them both as commune-dwelling hippies in the new film Wanderlust. In their new show, Keegan and Jordan go from stand-up, to sketches about Scrabble, to a top-notch presidential impersonation.

Their new series gives them full creative control over their comedy, but that hasn’t always been the case. They join us to discuss the behind-the-scenes creative process of MADtv (and the difficulties therein), the keys to developing strong impressions, and exploring the humor of their bi-racial identities. Plus, Jordan divulges the details of an original card game he invented for movie buffs!

Key & Peele airs Tuesdays at 10:30pm on Comedy Central. The show was just picked up for a second season.
(Embed or share this segment)

Our resident pop culture advice columnists, the McElroy brothers of My Brother, My Brother and Me take on questions about movie posters as art, what happens when you judge a child’s abominable TV watching choices, and more.
(Embed or share this segment)

Are you ready to sacrifice hours, days, weeks of your life and your relationship to the outside world in favor of improving your archery skills and gathering herbs? If so, join Jesse in this week’s Outshot, the role-playing game Elder Scrolls V: Skyrim.
(Embed or share this segment)