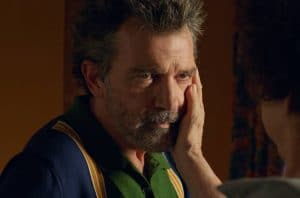 Antonio Banderas. Need we say more? The man has been acting for nearly forty years, yet his role in Pain and Glory is one of his most challenging to date. But what could challenge a man that fought for his life, guitar in hand and learned how to wield a sword from a whip-cracking Anthony Hopkins?

The film is directed by Banderas’ long-time friend, acclaimed filmmaker Pedro Almodóvar. The two started working together in Madrid. Banderas was a regular in Almodóvar’s eccentric dramas throughout the 80s. But by the 90s Banderas had relocated to Los Angeles and was making his way into American films like The Mambo Kings. Over the years he became the Banderas we all know; the Banderas that is a household name.

But all his Hollywood know-how had to be set aside when preparing for his character in Pain and Glory. Banderas plays Salvador Mallo, a director crippled by his many maladies: headaches, back pain, asthma. As a result Mallo’s career is at a standstill. He’s stuck, yet he still has this yearning to create. All of which has been a very real struggle for Almodóvar, who has lived with chronic pain for much of his life.

The film debuted at Cannes Film Festival where Banderas won a much deserved award for Best Actor — his performance is beautiful. He doesn’t try to channel Almodóvar, but rather personifies the director’s pain. But don’t take our word for it, go see it yourself.

On Bullseye, Banderas talks to us about about how his heart attack has informed his acting, reuniting with Almodóvar and coming-of-age in Spain.

Pain and Glory is in theaters now.

Liked Antonio Banderas? Listen to these next...