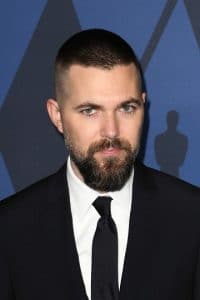 Robert Eggers is a filmmaker who is known for making beautiful horror films that linger with you long after you’ve left the theater. His films are also incredibly haunting.

The writer, director was born in New England and cut his teeth in New York designing and directing theater productions. He made his feature film debut with 2015’s The VVitch which
premiered at the 2015 Sundance Film Festival. It was based on a script written by Eggers. Set in 17th century New England, a family of settlers are haunted by an evil force that threatens to destroy them. The film received critical praise.

His latest film, The Lighthouse, is equally as haunting.

It’s about two old-timey sailor men living on an island off of New England in the 1800s. One is old. The other is young. It’s all in black and white. The wind howls outside. The old man, played by Willem Dafoe, doesn’t like the young one. He’s played by Robert Pattinson. They drink a lot. Somewhere, off the shore, there’s a mermaid. A storm comes. The two men, slowly, lose their sanity. We don’t want to give too much of it away. You really have to see if for yourself!

The film premiered at the Cannes Film Festival and has since received rave reviews. Robert talks to Bullseye about the joys of research down to the finest historical detail, about the uniqueness of the New England landscape and provoking questions in his films. Plus, we find out what scares him the most.

The Lighthouse is in theaters now.

Liked “The Lighthouse” Director Robert Eggers? Listen to these next...

Gilbert and Jaime Hernandez on 40 years of Love and Rockets