“We don’t hate you – there’s no need for hate now. Or love.”
Dr. Kibner (Invasion of the Body Snatchers) 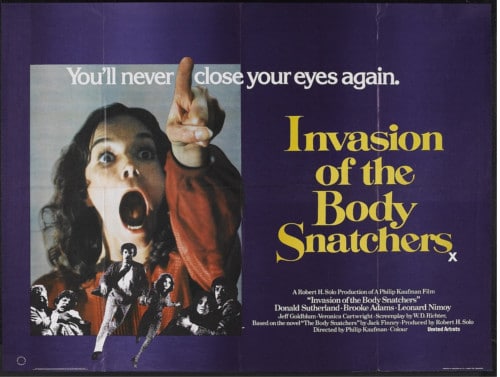 Invasion of the Body Snatchers

Don’t be a pod! On this week’s episode April welcomes director Leigh Janiak (Honeymoon, Scream: The TV Series) to discuss 1978’s Invasion of the Body Snatchers. The two touch upon how Leigh’s film, Honeymoon, and Invasion both contemplate the question, “What would you do if the people closest to you were suddenly not themselves?” They discuss the incredible sound design of the film and how it creates a very creepy atmosphere. Leigh elaborates on working on the Scream: TV Series and how she learned to improvise on set. They both agree that Donald Sutherland may not be the typical leading man, but that frock of permed hair is really working for him. Plus, they dive into the famous ending of the film and what it really means to be a human being.

You can watch Leigh’s film Honeymoon on Hulu

And if you haven’t seen it yet, go watch Invasion of the Body Snatchers.

With April Wolfe and Leigh Janiak