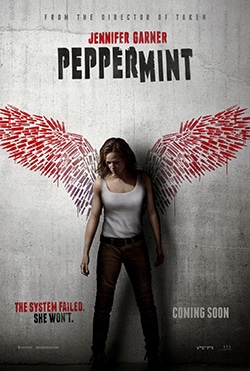 Peppermint
You heard right, the band is back together! This episode marks the return of our Switchblade Sister April Wolfe. And this week the crew is talking about the divisive (and pretty racist) new Jennifer Garner film Peppermint. Ricky discusses his feelings on Twin Peaks: The Return. April celebrates the the life of her beloved cat. And Alonso questions whether fall is arriving or not. Plus, the gang listens to messages from the “Who Shot-Line.” This week’s questions was, “Which actress, who has never fronted an action film, deserves to be an action hero?” And as always, ‘Staff Picks.’

In news, Candyman is coming, Olivia Munn is chastised, and Facebook apologoizes for taking down those nude Burt Reynolds photos.

Next week we’re discussing The Predator.