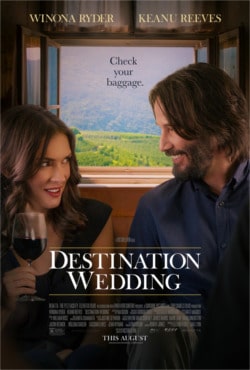 Destination Wedding
This one is a winner. That’s right, we’ve got the head writer for Maximum Fun’s International Waters, Riley Silverman. She’s on the show to talk about the new Winona Ryder and Keanu Reeves joint, Destination Wedding. Ricky celebrates the work of Stevie Wonder. Drea reminisces about a high school production of Clue. And Alonso won’t shut up about the Venice Film Festival. Plus, the crew plays some calls left by listeners on the ‘Who Shot Ya?’ hotline, which will now and forever be known as the “Who Shot-Line.” (Kudos to Drea Clark for coming up with that name). And, as always, Staff Picks.

In news, First Man is making some people angry, some idiot wore a “Weinstein is Innocent” t-shirt to the Venice Film Festival, and Alfonso Cuarón directed Harry Potter and the Prisoner of Azkaban because Guillermo Del Toro yelled at him.

And the question: Which actress, who has never done action before, deserves her own action movie?