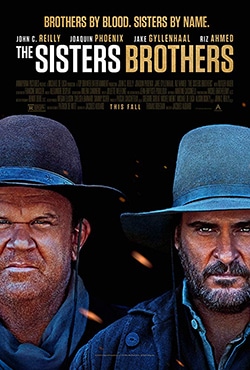 The Sisters Brothers
Inkoo is back in the building! She joins Ricky and Alonso in an enthralling discussion of the new Joaquin Phoenix/ John C. Reilly western The Sisters Brothers. As could be expected there is some major disagreement on this movie. For ‘What’s Good?’ Alonso is loving BoJack Horseman. Inkoo is looking forward to eating some LA Korean food. And Ricky is all set to attend his first film festival, the LA Film Festival. Plus, the crew gets a call from field reporter April Wolfe from Fantastic Fest in Austin, Texas. And always, staff picks.

In news, THR’s Top 100 Most Powerful People in Entertainment are very white, Dan Fogelman is mad at white male critics, and Chloé Zhao gets hired for The Eternals.