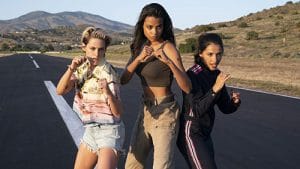 The gang welcomes the hilarious and talented actress Artemis Pebdani (Scandal, It’s Always Sunny in Philadelphia) into the booth to discuss the new Charlie’s Angels. We talk about the movies that should be remade because they did not live up to their full potential. We have another installment of the “Christmas Zaddy Christmas Movie Minute.” And, as always, staff picks.

In news, Nicolas Cage will star in a movie about Nicolas Cage, John Travolta campaigns for an Oscar, and April Wolfe assures the movie-going public that PG-13 movies can be vicious too.

Liked Episode 116: ‘Charlie’s Angels’ and Remaking Movies Correctly with Artemis Pebdani? Listen to these next...

Episode 221: A Belated ‘Shang-Chi’ Show and Our Turkeys of the Year with Andrew Ti

Episode 219: ‘The Harder They Fall’ and Black Westerns with Filmmaker Jared Moshe

Episode 218: ‘Dune’ is For Lovers of Bureaucracy and Economics

Episode 217: ‘Interview With The Vampire’ Should Have Been Gayer with Jordan Crucchiola