Slackers of the world unite! Fire up your flux capacitors! “Go Fact Yourself” has trivia that spans the timeline this week! 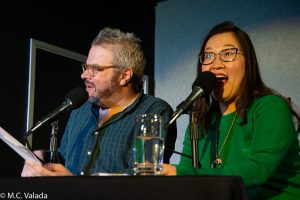 Gareth Reynolds is best known as one of the hosts of “The Dollop.” It’s a podcast that shares stories from U.S. history in a fun and engaging way. That includes some less savory information — like the details about George Washington’s teeth. Gareth will also tell us personal stories, including what it was like to be a writer for “Arrested Development” and how he first met his cat, Jose. Gareth’s new comedy record, “Riddled with Disease,” is available now.

Ali Spagnola also works in comedy, but in a different medium. Her presence on social media has earned her millions of followers across many platforms. What’s even more impressive is that she’s done it all while being physically fit, musically talented and breaking multiple world records. She’s even found a way to turn the hate that comes with being a prominent online figure into something very positive and constructive.

The guests will discuss lessons from history, movies about the past and animated shows about the future!

What’s the difference between pan frying and sauteing?

What’s the difference between a pan and a skillet?

Gareth Reynolds: The Green Bay Packers from the 1990s until now, the film Back to the Future and animals. 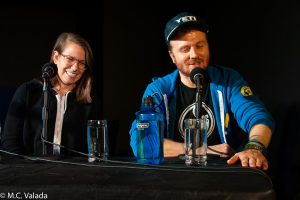 James Tolkan, retired actor best known for his role in the Back to the Future film series. 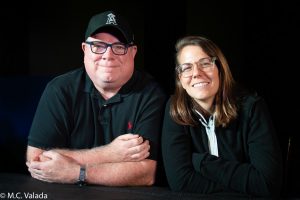 Go Fact Yourself was devised by Jim Newman and J. Keith van Straaten, and produced in collaboration with Maximum Fun. The show was recorded at Center For Inquiry Los Angeles.

Get our NEW Go Fact Yourself t-shaped shirt!

Liked Ep. 53: Gareth Reynolds & Ali Spagnola? Listen to these next...