Grab your favorite science-fiction novel and settle into your 1400’s English outfit for this episode of Go Fact Yourself!

Sara Schaefer is an accomplished comedian and writer. She won an Emmy for her time as a blogger on “Late Night with Jimmy Fallon.” And yes, you can win an Emmy for blogging! But that was not her first Emmy nomination, that came during her time as a writer for a show that might help her out today: “Who Wants to be a Millionaire?” Sara’s new comedy album “LIVE LAUGH LOVE” is available now.

Sara’s opponent is Kurt Braunohler! He’s the host of the Los Angeles comedy show “Hot Tub with Kurt and Kristen”. These days, he’s got a pretty great professional life, but that wasn’t always the case. He’ll recount some of the roughest parts of his career, including when he performed an hour of stand-up to an audience of three people. You can see Kurt in the Showtime series “Black Monday”

As our guest’s trivia prowess is pushed the limit, we’ll learn more about the postal service, barnyard animals and the two Coreys.

What’s the difference between certified mail and registered mail?

What’s the difference between a bull and an ox? 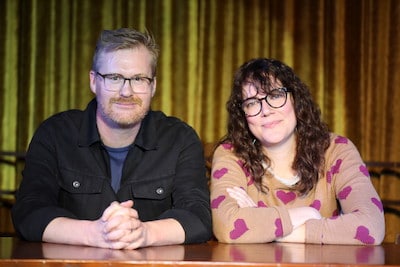 This episode is sponsored by CA Trusts.