Avengers, Assemble – at the Center for Inquiry for a brand new episode of Go Fact Yourself!

Rob Corddry is perhaps best known for “Childrens Hospital,” the comedy show that he created and starred in. It was so well-received, it earned him four Emmy awards. But his first Emmy award actually came years earlier as part of “The Daily Show with Jon Stewart”… sort of. He’ll tell us about that and explain the skills he’s gathered as an Eagle Scout.

Mimi Pond learned to love drawing early on from her dad and from some of her favorite comics. That led to her creating the graphic memoirs Over Easy and The Customer is Always Wrong. She’ll tell us about why she doesn’t have much patience for stick figures, and discuss the magic of Oakland, California.

Our guests will compete to answer trivia about comic book characters on the page and small screen.

What’s the Difference: Hall of Justice

What’s the difference between a hallway and a corridor?

What’s the difference between “illegal” and “unlawful”?

Rob: The TV show “Marvel’s Agents of S.H.I.E.L.D.,” the movie The Abyss, and CIA tradecraft 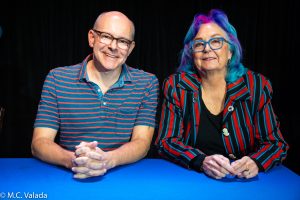 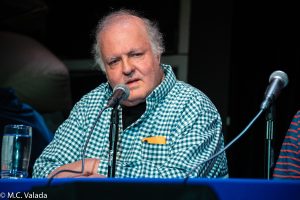 Mark Evanier, blogger, comic book writer, and author of the book Mad Art : A Visual Celebration of the Art of Mad Magazine and the Idiots Who Create It Paperback. 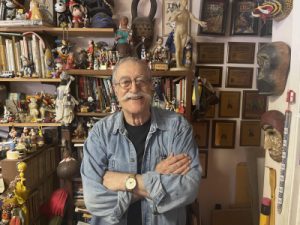 Sergio Aragones, illustrator best known for his contributions to Mad Magazine and creating Groo The Wanderer. 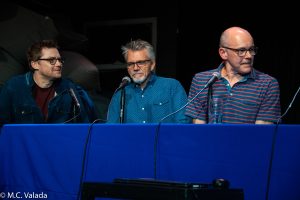 Jed Whedon & Jeffrey Bell, two of the showrunners for “Marvel’s Agents of S.H.I.E.L.D.”