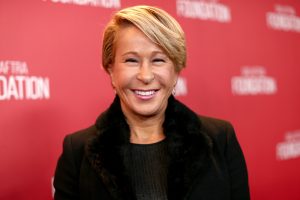 The Craziest Day of My Entire Career: Yeardley Smith

The Craziest Day of My Entire Career is a regular segment where we talk with some of our favorite people in pop culture and ask them about some truly unbelievable stories. This time around, we’re joined by actor Yeardley Smith.

For over 30 years now, Yeardley has voiced Lisa Simpson, one of the most iconic characters of all time. She is also a podcaster. Since 2017 she’s co-hosted Small Town Dicks, a true crime podcast that just finished up its 9th season.

Yeardley is also an on-screen actor. When we asked her about the craziest day of her career, she took us back to 1986, before podcasts and before the Simpsons. She took us back to a time when she was an early career actor taking pretty much whatever role she could get. This included a big part in a Stephen King film that she couldn’t turn down, even if it meant a giant crazy truck might run her over.

You can catch Yeardley on the Simpsons which is in the middle of its 33rd season right now on Fox. You can also listen to Yeardley’s podcast Small Town Dicks wherever you get podcasts.

Liked Yeardley Smith on the Craziest Day of her Entire Career? Listen to these next...