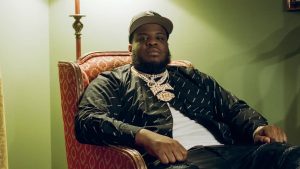 Maxo Kream on his critically acclaimed album “Weight of the World”

On the latest episode of Bullseye we’re joined by Houston rapper Maxo Kream.

People often compare him to his Houston forbearer Scarface, another MC with a gift for elegant, almost beautiful verses about life’s most intense and difficult moments.

Maxo Kream has been in and out of jail, along with many other members of his family. When hurricane Harvey hit Houston a few years ago, many of them lost their homes.

He’s also lost friends and relatives to gun violence, including his brother last year. He lost his grandmother to Covid-19 in 2020, too.

Maxo Kream has endured an extraordinary amount of pain. And he’s not afraid to put that pain on wax.

On his latest record, Weight of the World he raps about losing his brother, his grandmother and becoming a parent.

Jesse Thorn talks with Maxo about his critically acclaimed album Weight of the World. They discuss what his family members think about his records and how he writes about tough times.

Liked Maxo Kream? Listen to these next...