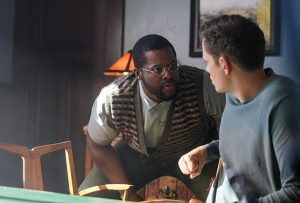 Winston Duke was born in Trinidad and Tobago and moved to Brooklyn when he was nine. He studied acting at Yale and went on to work mainly in TV during his early twenties. He did not break into movies until he was thirty. That first movie role was M’Baku in 2018’s Black Panther. Duke followed that up with an appearance in Avengers Infinity War, then with a starring role in Jordan Peele’s Us.

Seeing Duke in person, it is not hard to imagine him in a superhero film. At 6’5, he is a big guy and solidly built. He is already shooting the sequel to Black Panther right now.

Last year, he starred in a very different movie. It was the Edson Oda film Nine Days. In the movie, Winston Duke plays Will. Will lives in a house in the middle of an unearthly desert. His job is to interview souls who want the chance to inhabit a living person’s body.

One of the candidates is named Emma, she is played by Zazie Beetz. Emma is not really like the others. She is curious, free-spirited and often gets Will to think about his own existence.

We are thrilled to have Winston Duke on the show, and just as excited to have our friend and correspondent Jarrett Hill interviewing him. Jarrett is a veteran journalist and co-host of the Maximum Fun podcast FANTI.

Nine Days is available to watch online pretty much anywhere, go check it out!

Liked Winston Duke? Listen to these next...