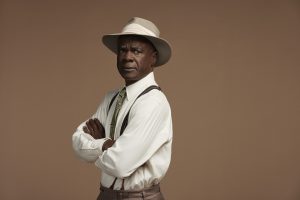 His first big role was at 12, in the original Broadway production of A Raisin in the Sun – he performed alongside Sidney Poitier, Ruby Dee and Louis Gossett Jr. In 1975, he starred in the hugely influential film Cooley High – a classic, if you haven’t seen it. And in 1978, he married Aretha Franklin.

He’s played mayor Clarence Royce on The Wire and Doctor Senator on the most recent season of Fargo. Just the other week he portrayed Mose Wright, the great-uncle of Emmett Till, in the ABC miniseries Women of the Movement. Those are just some of his 150-plus credits.

When we talked with him last year, he’d just finished performing in the Academy Award-nominated film Ma Rainey’s Black Bottom.

It’s a film adaptation of the August Wilson play of the same name. It focuses on the blues singer Ma Rainey, played by Viola Davis; her piano player Toledo, played by Turman; and Levee Green, her saxophone player, played by the late Chadwick Boseman in his final role. The story centers on a fateful recording session of “Mother of the Blues” by Ma Rainey in 1927 Chicago.

Ma Rainey’s Black Bottom is streaming on Netflix – go check that out. And don’t forget to see Turman in Women of the Movement, which is out now.

This interview originally aired in January of 2021.

Liked Glynn Turman? Listen to these next...