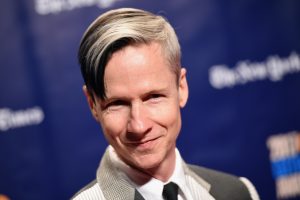 Living legend John Cameron Mitchell joins us on the latest episode. He’s directed the movies Shortbus and Rabbit Hole, acted on shows like Shrill and Girls. But he’s probably best known for his iconic work is the cult hit Hedwig and the Angry Inch.

The show started as a musical in the late ’90s, then became a movie in 2001. It was written by Mitchell and composer Stephen Trask.

It follows an East German rock singer named Hedwig, played by Mitchell in both the stage and movie versions.  Hedwig is assigned male at birth, falls in love with an American soldier, gets coerced into having gender reassignment surgery. She marries the soldier, moves to Kansas, loses the soldier, and starts her own rock band. But there’s so much more to the story – that’s only the first act!

It’s a story about queerness, about identity, about the threads rock and punk music shares with other live performances, like drag and cabaret and Broadway.

These days, John Cameron Mitchell has gotten back to writing and recording new music. He’s put out an ongoing benefit called New American Dream, in which he collaborates with Ezra Furman, Xiu Xiu and Stephen Trask – co-creator of Hedwig.

Jesse Thorn talks with John Cameron Mitchell about his childhood, punk rock, his songwriting process, creating Hedwig and the Angry Inch, and how his relationship with the piece has changed over the years. Plus, they take a deep dive into the making of his film Shortbus – a conversation that was too spicy for radio.

You can buy and listen to New American Dream on Bandcamp.

Liked John Cameron Mitchell on ‘Hedwig and the Angry Inch’ and more? Listen to these next...